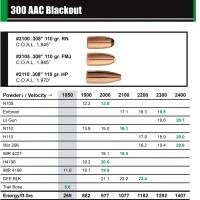 Many AR-15 enthusiasts and hunters have a strong appreciation for .300 AAC Blackout because of its versatility and available grain weight range. It has very similar ballistics to a traditional AK-47 chambered for 7.62x39mm (.300 AAC Blackout is 7.62x35mm metrically), but you have the popular American platform of an AR-15.

Originally, the cartridge was developed by Remington and Advanced Armament Corporation (AAC) to provide the military with a .30 caliber cartridge in an M4 platform by simply changing the barrel, but utilizing the same magazines. Although the military has not truly fallen in love with the caliber, civilians absolutely have. A crowd favorite for pig hunting, deer hunting and general subsonic fun with silencers, it remains a strong choice for many shooters.

Since you can work with bullets from 110 grain up to 240 grain in both hypersonic and subsonic loads it boasts tremendous, close-range versatility. Most shooters use it…

View all posts by Adam Scepaniak →